From living together to “colleagues” – how have we found the transition? 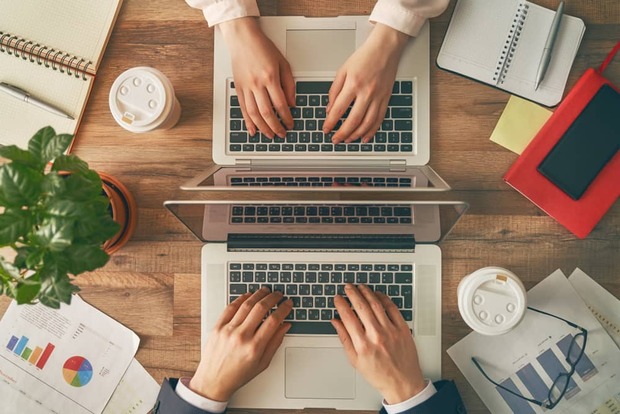 Almost all of us have experienced some changes to our working lives this year, whether that’s taking extra precautions at work, being in and out of the workplace, or working from home permanently.

So how has the UK found the experience of working alongside the people we live with? We surveyed 1,008 employed adults to find out.

Of the 1,008 people we surveyed, 42% have had a partner at home with them while they worked from home, 36% had family including children, 5% had housemates around and 2% lived with friends.

Either all or some of the time, two-thirds of these people were also working from home. These stats show that UK employees have spent a lot of time around the people they live with this year.

For many, all of this time together has actually had positive effects. 45% of employees say that their relationship with the people they live with has become stronger during their time working from home together.

Getting to know each other’s jobs, ‘having someone to make me lunch’ and hearing housemates ‘in professional mode’ are among what remote workers have liked most

Positively, in a stressful and turbulent year, remote workers have a lot that they’ve liked about working at home alongside the people they live with.

60% have enjoyed spending more time together, while a quarter have enjoyed getting to know more about what the people they live with do on a daily basis – helping to give those conversations about work over dinner a little more context.

This also led to home workers enjoying the treat of hearing the ones they live with in ‘professional mode’ (18%) and getting to know their housemate’s/friend’s/partner’s colleagues more through hearing calls (7%).

Many employees also felt some culinary advantages. 52% have enjoyed the opportunity to eat lunch together, while ‘having someone to make me lunch’ (20%) and ‘going on walking breaks together’ (36%) also made the top list of the most enjoyable aspects of this new situation.

But – are you talking too much, taking up a lot of space or wearing your pyjamas all day? You’re probably annoying the person you work from home with

Despite this experience bringing people closer together, this extra time in each other's company has led to employees noticing some bad habits forming in their new ‘colleagues’.

22% of employees say that the worst habit of those they work from home with is ‘distracting me while I work’, followed by ‘making noise when I’m on a call’ (20%).
It also seems like the lack of boundaries in remote working is affecting more than just the person overstepping them. ‘Working late into the evening’ is another common trait that remote workers dislike about their new work from home partner (17%).

A further 9% say that they have to creep around their housemates as they don’t like any noise, while the same amount have noticed those they live with to have the bad habit of waking up too late. Bad habits also include working in pyjamas all day (6%) and not showering (4%).

What’s the worst habit of the person you’re working from home with?

(select as many as apply)

This time together has also led to new revelations

You know everything there is to know about the people you live with, right? Wrong, apparently. This time working at home together has led to Brits learning more about each other than they knew before.

Almost a quarter (23%) said that the person they live with had been ‘hiding how hard they work’, with it coming to light during this time.

1 in 5 said they learned how easily distracted their work from home partner is, while 13% have hidden how professional they are.

Interestingly, more than 1 in 10 (12%) stated that the person they’re living and working with has an ‘unusual working routine’ – we’re intrigued.

Remote workers have even started to notice the little things that we somehow missed before. 10% said they learned that the person they live with is a loud typer, they talk to themselves at work (9%), they use a lot of jargon (7%) and they’re more outspoken at work than they are at home (6%).

What, if anything, have you learned about the person/people you’re working at home with during this time?

(select as many as apply)

Of course, a new routine is going to come with a whole new set of challenges. Although many remote workers in 2020 have enjoyed the process overall, there have been some difficulties.

The number one difficulty of working at home with someone else is ‘trying not to distract each other’ – with 42% of employees experiencing this issue.

Conflicting meetings and calls also brought some troubles, 24% found ‘needing to leave the room so you can both be on a call’ to be a difficulty, while just less than a quarter (24%) struggled with the sudden change of being around each other all day.

Top 5 biggest difficulties of working at home with someone else

On the other hand, almost 1 in 5 seem to be in home-working bliss, with 19% saying that no difficulties arose.

Thankfully, remote employees have found ways to get around these issues.
‘Making it known ahead of time if you need quiet’ has been found to be the most popular solution, with 56% relying on this method to keep the peace.

This is followed by 48% who like to block out the noise and have found headphones to be the answer to all those pesky distractions.

Other solutions found include syncing up lunchtimes (38%), communicating which space someone is going to use (26%), creating a schedule of when you’re going to need the room (8%) and finally, for those who like to ensure zero distractions, 8% have found the solution to be ‘don’t talk throughout the day’.

Overall, remote working has been a mostly enjoyable experience

Perhaps unsurprisingly, not having to commute was the most enjoyable benefit, with over three-quarters of employees stating that this was what they’ve enjoyed the most.

42% have enjoyed being able to work to their own schedule, having the ability to focus (38%) and the peace (36%) – no one is missing the open-plan office then?

Of course, it’s not all joyful. Employees cited reduced social opportunities (63%), keeping motivated (41%), feelings of isolation (39%) and lack of variation in working days (34%) as the difficulties faced.

On the whole, it’s nice to see that many remote employees were able to find some positives in a difficult year and that housemates, families and partners were able to stand in as colleagues until employees can safely return to their workplaces.