The workplace initiatives that employees want next 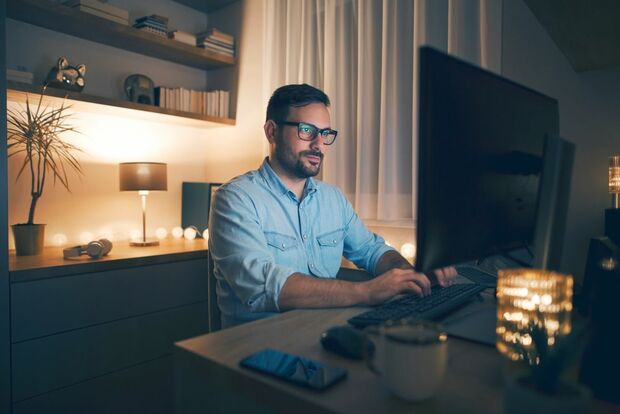 Remote working is currently changing the working lives of millions, but it’s not actually a new concept. It’s one that we have been forced to adapt to on a very large scale - but it turns out that many of us would like it to stay. A recent survey by Perkbox has found that now just 9% of employees would like to work completely from the office in the future.

Does this mean that we are ready for workplaces and working routines to change even further? Initiatives such as fully flexible working policies, pay transparency and gamification are being developed with the aim of improving the employee experience. They’re designed to allow people to work more efficiently, bring more motivation and energy to the workplace and enhance their overall work-life balance.

But as these initiatives have yet to be adopted on a large scale, we wanted to find out what employees really think of them.

We surveyed 1,600 people to find out if they’d like these initiatives to be introduced to their workplace, and whether they feel like they’d improve either their work lives, or their lives as a whole.

(N.B. this study was conducted in February 2020, pre-coronavirus outbreak and lockdown)

Are employees on board with fully flexible working policies? 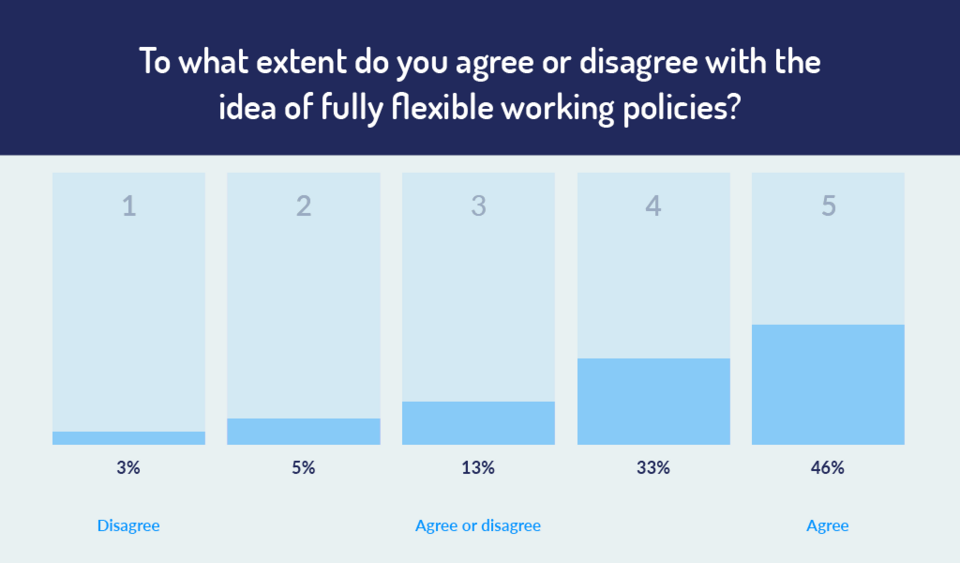 With remote working increasing in popularity - it could be suggested that fully flexible working could be the next step.

The introduction of fully flexible working would bring an end to the days where employees are contracted to work nine to five. Instead, employees – where applicable – may work in the hours that they please. That means no set working hours and the ability to work from anywhere – as long as they achieve their goals and targets.

Flexible working policies are being discussed as a way to allow employees to maintain a stronger work-life balance and grant more flexibility for the obstacles that life may throw our way. But do employees think this sounds like a good idea?

The survey showed that a whopping 76% of employed people agree with the concept of fully flexible working.

Just 9% either disagree or strongly disagree with the concept showing that workers are ready to get a little more flexible with their routines.

What effects do employees think fully flexible working might have on companies? 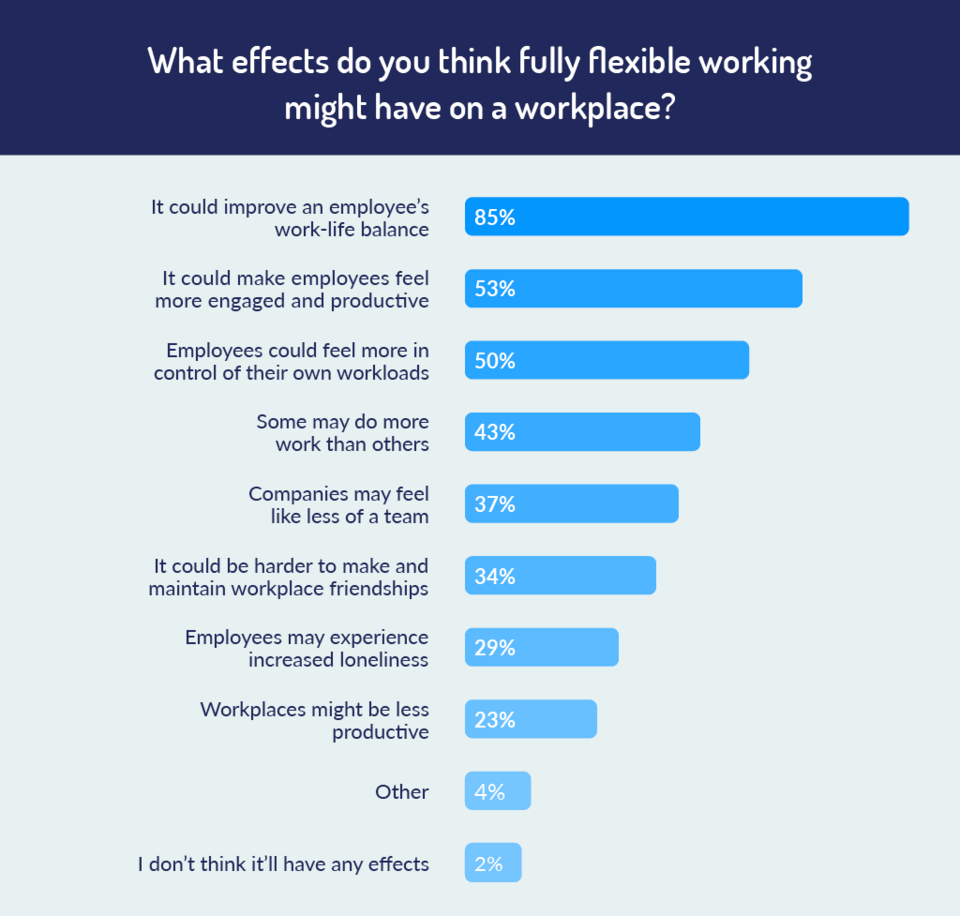 Of course, at first thought, fully flexible working can sound very appealing – but are there any setbacks? The results revealed that employees could see both positives and negatives to the policy.

The most common opinion was that a huge 85% believe that fully flexible working could improve employees’ work-life balance. As the phenomenon of burnout continues to rise in 2020, it may come as no surprise for this benefit to be at the forefront of the majority of employees’ minds.

In addition, more than half (53%) believe that fully flexible working could make employees feel more engaged and productive, while 50% also feel that it could allow employees to feel more in control of their own workloads.

On the other hand, employees do have some thoughts on this initiative that may lead to less positive consequences. 43% feel that fully flexible working policies could lead to some doing more work than others, while 37% think that companies may feel like less of a team, as employees work at different times.

Furthermore, over a third believe the policy could make it harder to make and maintain friendships in the company.

The results show that no matter how ideal the policy may sound on the surface – it could also have some major downsides. The key to this policy would be an extra emphasis on communication at all times and continuous monitoring to ensure that all team members remain happy and productive.

Overall, just 2% feel the introduction of a fully flexible working policy wouldn’t have any impact on the workplace.

Money might make the world go round – but do we want to know how much our colleagues and superiors are taking home every month? 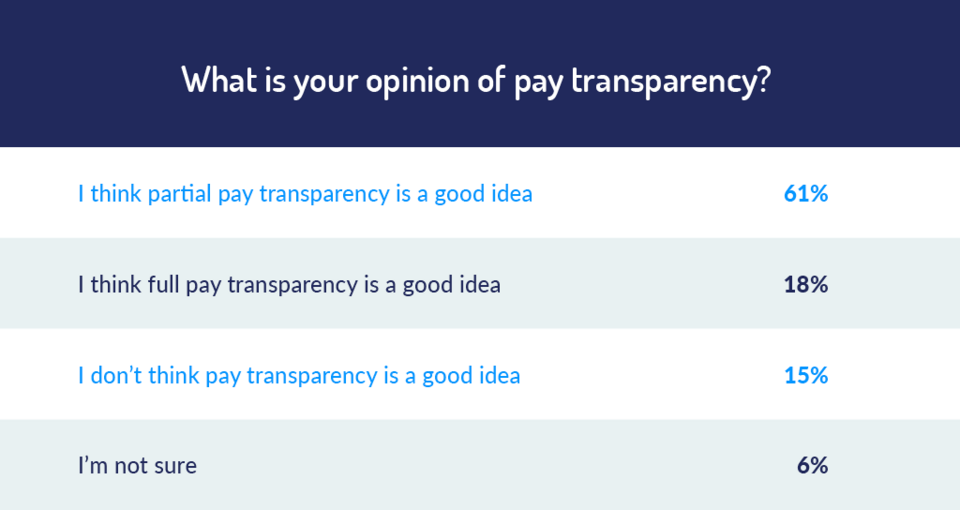 Another highly discussed concept is the idea of pay transparency. This is where companies reveal a lot, or a little, about how much they are paying their employees. It’s the practice of allowing the company’s pay figures to be visible to other people, both internally and externally.

But does the working public think this is a good idea? It appears that the answer is yes.

A further 15% don’t like the idea of pay transparency, while 7% aren’t sure.

Who feels this way? 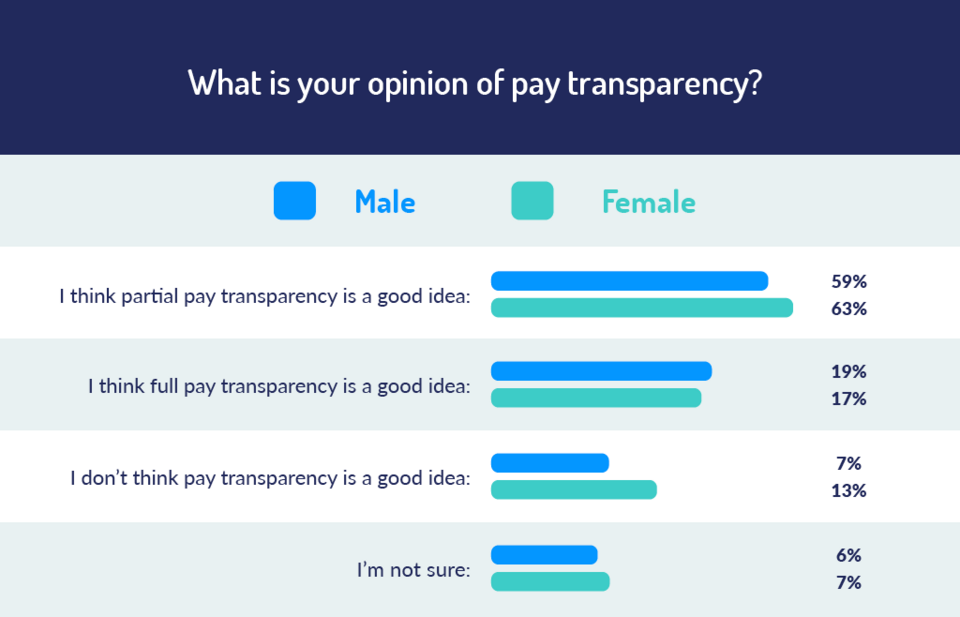 Pay transparency is often seen as a vehicle to drive gender pay equality. In turn, we wanted to see if the thoughts surrounding pay transparency were skewed in any particular direction. But in fact, it seems that both men and women are in agreement about the policy.

80% of women believe that full or partial pay transparency is a good idea, with 79% of men in agreement. In fact, slightly more men are in favour of full pay transparency (19%) compared to women (17%) – whereas 8% more women than men don’t agree with the concept.

Opinions also remain similar across the age ranges, with the only noticeable difference being within the 55+ age range. 15% of people over 55 don’t agree with pay transparency, compared to 11% of 18–24-year-olds.

But would pay transparency provide any benefits?

When asked for drivers of productivity and motivation, a huge 70% stated that ‘pay’ is, in fact, their biggest driver.

Looking at people who find pay their biggest motivation, it’s no surprise to see that 80% of those motivated by financial gain are in favour of the introduction of pay transparency.

That suggests if companies were to make salary information available internally, they may be able to drive greater productivity and higher results from their employees who are driven by seeing what those at other levels within the company are earning.

What are the most popular drivers of productivity and motivation? 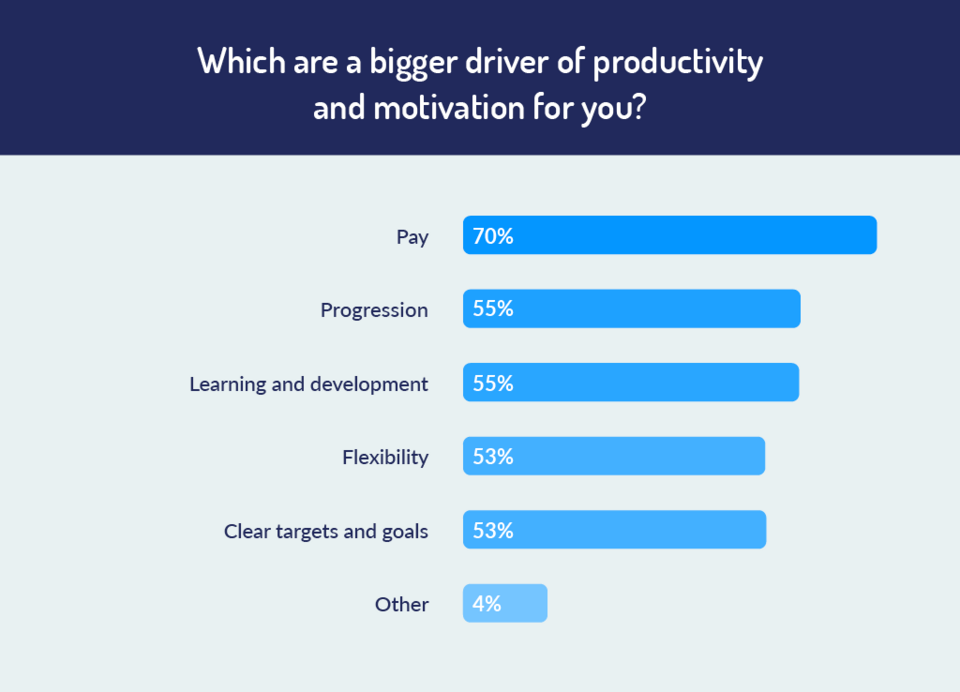 Further factors that get employees going in the morning include progression – of which over half (55%) find motivating, followed by learning and development (55%), flexibility (53%) and clear targets and goals (53%).

The last driver of motivation: clear targets and goals, leads on to the final new initiative which uses this driver as its focal point.

Should we take the saying ‘work hard, play hard’ literally?

In the day and age where attention spans are decreasing at an alarming rate and the number of daily distractions we have to fight off seem to be ever-rising – could a bit of friendly competition be the answer to our productivity woes?

Gamification at work is the process of making an activity more like a game, by finding ways to make it more entertaining and rewarding. In a workplace, you could use a leaderboard, points or scores to show each team member’s performance. The winner – based on performance or results, may be offered points, rewards or prizes (but it doesn’t normally affect pay).

To find out what the consensus is surrounding gamification in the workplace, we asked employed people how they thought it could help.

The most popular result was 56% who believe that it would help to boost their motivation and energy.

Over half also believe that it could help to recognise people for their achievements, while over a third feel it could help with team building.

Likewise, a third feel that gamification in the workplace could help improve efficiency. It’s believed it could help employees receive more up-to-date feedback (29%), which could, in turn, help employees to feel more fulfilled and engaged in work.

Does this mean it’s time for these initiatives to be introduced into more workplaces? We’ll be watching this space…

How has 2020 impacted employee wellbeing?

How disengaged employees could be impacting your business