Creating a community in a multi-faceted manufacturing company with Perkbox 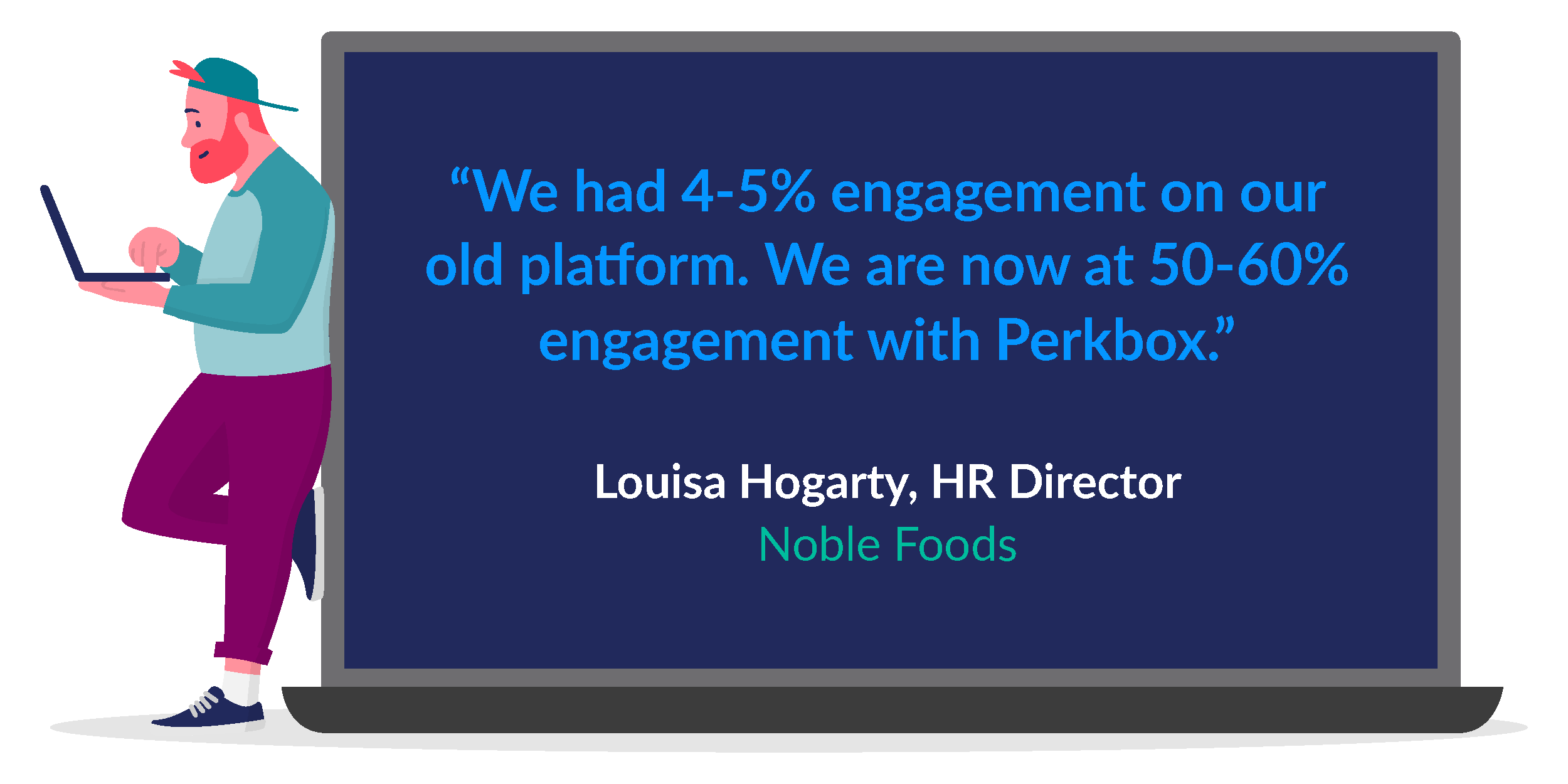 Noble Foods is a group with £600m in turnover and around 1,800 employees. First and foremost, it’s the UK’s leading supplier of fresh eggs to retailers.

The group currently have four egg–packing centres and pack 75 million eggs per week into boxes. Their brands are household names to most, including: Happy Eggs, Big & Fresh, Eggs for Soldiers, Heritage Green and Purley Organic.

Alongside this, the group operates a number of different facets of the egg supply chain such as milling and farming. This includes ownership of the premium deserts brand, Gü.

Turning to their workforce, job roles vary from packaging eggs, to creating deserts, to milling grain: an occupation that is still very traditional and labour-intensive. However, manufacturing is only one side of the business, the second tier is supply. “We have a huge transport fleet” explains Louisa Hogarty, HR Director, “there are 300 drivers across the group with articulated trucks”.

Which comes first, the chicken or the egg? Well in the case of Noble Foods it’s the chicken. To ensure the highest quality of eggs, there is a team devoted to rearing chicks and caring for the hens.

After 11 months of launching Perkbox:

When it comes to their employees, Noble Foods are heavily dependent on migrant workers. Consequently, one of the biggest challenges for the group is a diminished labour market as a result of Brexit.

In almost all of their divisions, Noble Foods are heavily reliant on European labour – Eastern European labour in particular – and have noticed increases in turnover of late. Louisa added, “The marketplace has become tougher so it is harder to recruit, especially in roles that are historically paid at near minimum wage. When supermarkets are paying £9 per hour to stack a shelf, it is hard to remain competitive.”

Noble Foods are also struggling with talent attraction. “In all divisions” explains Louisa, “the front line operational roles are where we struggle to remain competitive.” The root of this problem is the increase in wage costs.

As the pound continues to drop in value, companies like Noble Foods are limited in their ability to bump-up wages. As manufacturing in the UK has relatively tight profit margins, wage-inflation is a nightmare to navigate.

Off the back of this, Louisa believes Brexit has caused a feeling of workplace hostility: “our employees felt that they were not wanted in the country any more – even though they had a job and were wanted.”

The group has begun addressing their employee value proposition (EVP), taking time to ensure that their proposal was one that was relevant and meaningful. This is typified by the group’s focus on delivering on promises to employees. “We wanted to do what we say we are going to do”, says Louisa.

It may sound like a given but communication within the workplace so often breaks down, causing wounds to fester and resentment to build between employees and management. It takes work to keep a culture of communication going but as a solution it is quick and incredibly effective. “Listening to groups revealed that our employees wanted WIFI in their canteen, so we put it in” says Louisa “It was quick and easy for us to do and a massive win for them.”

While Noble Foods have pushed up wages, incremental pay rises aren’t sustainable in the long term and actually have less of an impact than you think. Instead, the group has got creative and are piloting initiatives that add extra value to their employees’ paycheques.

These add-ons, or what Louisa calls “one percents” come in a variety of different shapes and sizes: “for example, we did not offer life insurance to our employees. We now have it in place for everybody”.

Perkbox has played a key role in both bolstering the group’s EVP and aligning with their “one percents” initiative. The platform has improved cross-company communication by connecting all employees to a shared hub, helping to create a community of workers.

The perks on-offer have also helped to salary stretch. According to Louisa, Perkbox has “enabled us to put extra benefits into the hands of our employees,” alleviating the pressure wage inflation has caused.

Switching to Perkbox has been hugely successful in comparison to Noble Food’s previous employee benefits platform – saving employees £25,246 in 11 months of launch. Louisa stated, “We have got more people using Perkbox than we had using the old system. We had 4-5% engagement on our old platform. We are now at 50-60% engagement with Perkbox, so it’s completely different.”

Louisa thinks that the positive uptake by staff is down to Perkbox feeling like an addition to their existing package. “There was a perceived higher value from Perkbox being a third party offering that we had bought for our employees.”

Already Perkbox is making some noise within Noble Foods, with people talking to one another about the platform’s benefits. Louisa has already “started a few stories internally, with people who have used Perkbox and saved money on their Christmas shopping.”

“There was a perceived higher value from Perkbox being a third party offering that we had bought for our employees.”

An EVP that shines all over the world