No offense: How to be a better ally 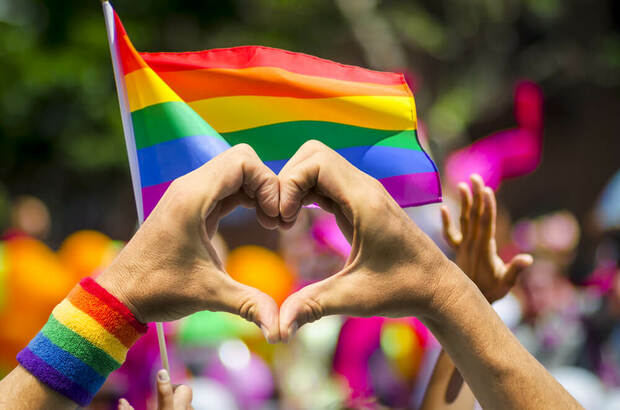 Four simple things you can do to make your LGBT+ friends and colleagues feel more comfortable.

If you’re LGBT+, there are lots of little things that people say or do that can seriously ruin your day. Unfortunately, it comes with the territory.

But most of the time, people don’t mean to cause offense or make you feel uncomfortable. It just hasn’t occurred to them that they’re doing anything wrong.

The good news is if you want to be a better ally, it’s a really easy fix. You just have to put a few simple rules into action.

So if you’re ready to learn, I’m ready to teach. Let’s do this.

Stop describing things as “so gay”. Please. It’s a really rubbish thing to hear, especially when it comes from someone you like and respect.

People get really defensive about it too. But honestly “I didn’t mean ‘gay’ as in gay, I just meant ‘gay’ as in bad” is a terrible defense.

I hear this all the time at work and in life, and it’s just so demoralising to have your sexuality used as a slur.

On a similar note, I’d also like to outlaw “You’re gay? I couldn’t tell!” I mean, what am I supposed to reply to that? Thanks?

Basically: keep an eye on what you’re saying. Think it through first. Is there a better way of phrasing it? Does it even need saying in the first place?

Oh and straight guys – please stop asking me what a “bear” is when you’re drunk. What’s that even about?

This one’s even easier than watching your language, because it takes virtually no effort at all.

Here’s a common dilemma for me:

Someone at work asks if I have a girlfriend. Well the answer is no, because I’m single. It’s also no because I’m gay. So how do I answer? If I say no, they continue thinking I’m straight. If I say “No, I like guys. But I also don’t have a boyfriend” it’s just a bit weird.

Simple fix: don’t ask people if they have a boyfriend/girlfriend. Just say partner instead.

It’s all about leaving room for people to open up.

The same goes for pronouns (he/him she/her they). You don’t necessarily have to state your own pronoun preference every time you meet someone (though that’s helpful), just don’t assume you know theirs for sure. Once you know for certain, commit it to memory and try your best to respect it.

When people make assumptions, it means we have to go out of our way to derail the conversation and clear things up. It’s messy, intimidating and not much fun for anyone.

When homophobia/transphobia happens, it can often feel easier to let it slide. Sometimes we feel intimidated, or we know from experience that speaking up can lead to trouble. I know I’ve been guilty of not stepping up the plate in the past.

So that’s where you come in. If you see or hear something that’s not right, don’t be scared to step in and challenge that behaviour. You’ll be doing someone a big favour, trust me.

Straight white guys in particular – that’s a superpower you’ve got there. Use it wisely. Make it known that discriminatory behaviour is not ok.

Together, we’ll fix the world. One rubbish incident at a time.

Be open to change

One of the key things to understand is that you’re not done yet. We’re all on a journey to becoming better, more compassionate people. Keep that in mind.

If someone calls out something you say, take a step back, listen, apologise and do better next time.

It might mean changing some of your habits. It might even mean going out of your way a little.

But if, at the end of the day, it makes someone else happier – isn’t that worth it? I think the answer is yes. I hope you do too.

Just kidding. Like I say, this is a journey, and we’re all in it together. But you’ve made a great start, just by reading this blog. And if you keep these rules in mind, you’ll do even better.

So good luck! I’ll see you around.