Becoming a standout employer with help from Perkbox 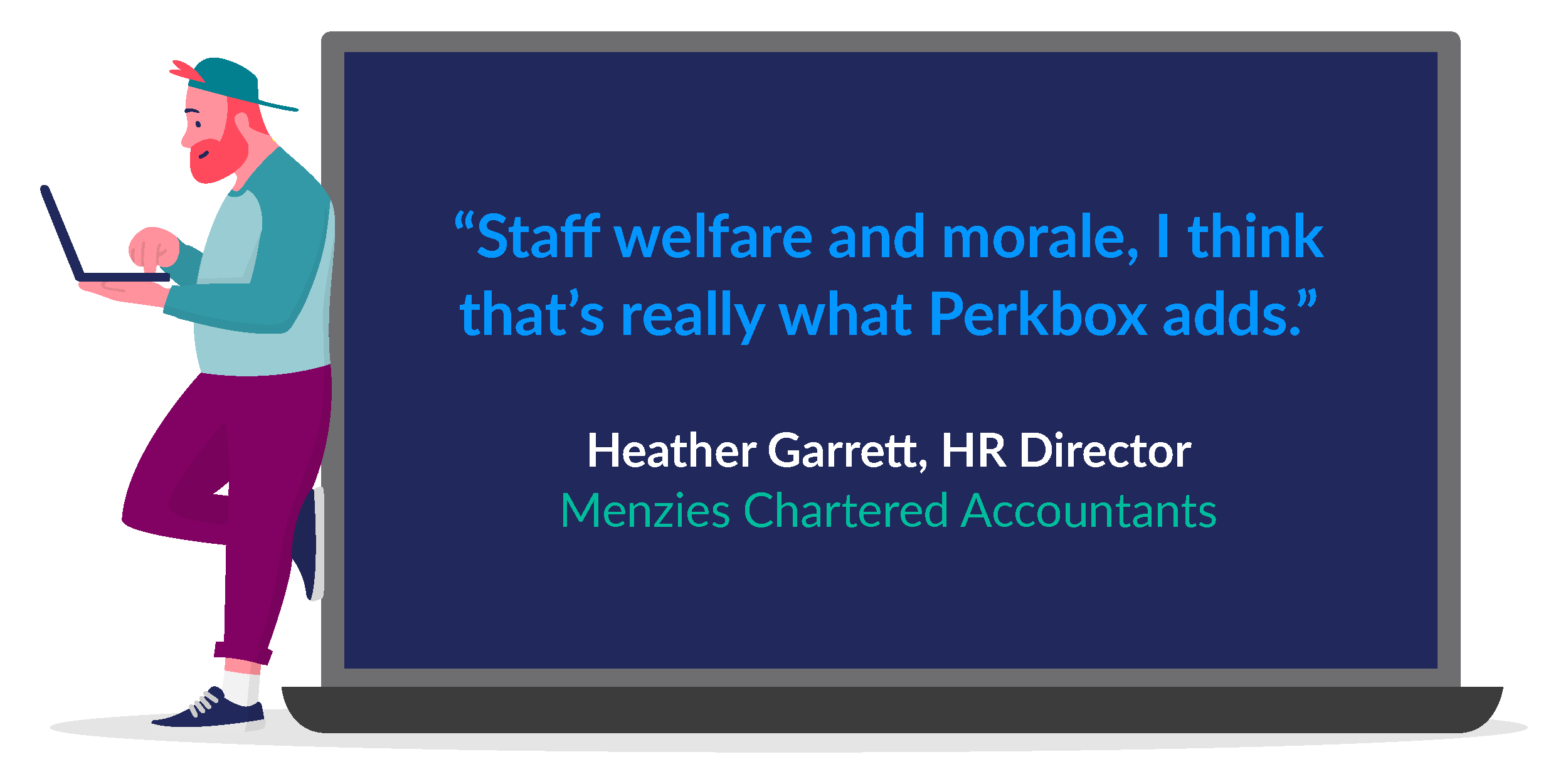 Menzies is a top 20 firm of accountants, finance and business advisors operating a network of offices across Surrey, Hampshire and London.

Described as the ‘best performing firm outside of the top 10’ by Accountancy Magazine, Menzies has over 470 employees and an annual turnover of more than £40m.

7 offices across the UK

Within 12 months of launch:

As a professional services company, employee performance is integral to the success of the business. To ensure employees are at the top of their game, Menzies wanted to make their remuneration package as attractive as possible. But it’s all about striking the perfect balance, offering enough in their employee value proposition (EVP) to keep employees motivated within an appropriate financial envelope.

Heather Garrett, HR Director at Menzies said, “A key challenge is ensuring that Menzies is ‘rewarding in the moment’ when someone goes above and beyond in their day job! We want to remunerate employees in a way that keeps them motivated and reinforces how much we value them.”

Standing out from the crowd

An inescapable challenge for all accountancy firms is their operational similarity to one another. As such, standing out from the crowd can be difficult. Menzies has made excellent headway in this respect, by winning a multitude of industry awards, however, being innovative in their industry is always tough and Menzies are always on the lookout for new ways to make their mark.

There was a concerted effort from Menzies to evaluate their firm in relation to their competitors. They wanted to know what their strengths and weaknesses were as an employer and most importantly, how could they differentiate themselves in a crowded market. “It started as a way of coming up to scratch against our competitors,” said Menzies, “As a firm, you never know how you compare to other companies”. From this vantage point, the company could then start to create an attractive EVP that stood out against their competitors.

As a result of this analysis, Menzies has focused on modernising their brand, placing an emphasis on staff benefits and wellbeing, which has given them an edge on many of their competitors. This is the embodiment of the company’s “Brighter Thinking” approach, which places strong relationships at the heart of the business.

Part of this project was about making their employee package more attractive by working on their office culture. Menzies wanted to “make people happy and feel more valued when they are at work.” As part of this rebranding effort, Menzies has introduced; pension matching, healthcare and life insurance, and now Perkbox, which the firm describes as a great addition to their “benefits offering.”

Focusing on the future

Menzies’ priority in developing a benefits programme was to reach and reward a millennial workforce. Professionals now entering the workforce have very different priorities and expectations from their work environment; employees now expect to have “added value” beyond a paycheque. As such, a benefits platform like Perkbox was the obvious choice, as it resonated with those starting out in the job market

“We wanted a platform to be able to reward staff that would appeal particularly to our millennials. Perkbox gave us a modern, inviting piece of software to allow staff to get discounts themselves but also receive Perkbox credits when they go above and beyond” explained Heather.

So far, Menzies staff have managed to save a staggering £33,770 across their business and have redeemed 6,978 perks in 12 months. These results are telling in themselves and show that Perkbox has been an instant hit. The big rankers among Menzies’ employees were the Caffé Nero, Apple and Odeon deals. “The cinema tickets and those little things that tick along have proved very powerful. I know that there are a lot of people who use Perkbox and value it very highly.”

Employees are going the extra mile

The Perkbox rewards and recognition function has also had an impact on the effort and energy employees put into their company. By making employees feel more valued by rewarding their hard work, Menzies have noticed their people going the extra mile. Heather added, “For the firm as a whole though, it has allowed us to reward employees in a new and exciting way and thus meant that they are being more productive and engaged – with some tax advantages!”

The most encouraging difference has been in the culture at Menzies. So far Menzies has seen a spike of 6% in employee engagement and there are no signs of it slowing down.

Heather has seen a marked difference in the positivity expressed in the employee feedback survey; staff seem to be happier and enjoying work much more than previously. Summed up: “Staff welfare and morale, I think that’s really what Perkbox adds”.

“I think next year will prove even more beneficial and we will try and use even more of Perkbox and what it has to offer. Early indications of the planned platform upgrades look appealing and will hopefully improve further staff engagement.”

"Perkbox gave us a modern, inviting piece of software to allow staff to get discounts themselves but also receive Perkbox credits when they go above and beyond."

An EVP that shines all over the world