When I grow up I want to be… 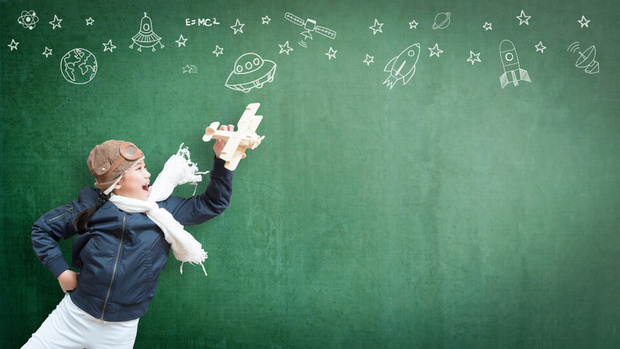 It turns out that the majority of us are still dreaming of the jobs we dreamt of as children.

Looking back to your childhood, can you remember the dreams you had of what being an adult would look like for you? So many children know exactly what they will be doing as an adult... until life happens, that is. Not many children spend time thinking about employee rewards and childcare vouchers, after all.

But how many of these childhood dreams became a reality? Perkbox Insights surveyed 1,567 people and these are the key findings:

Vet and Teacher are the most popular childhood dream jobs 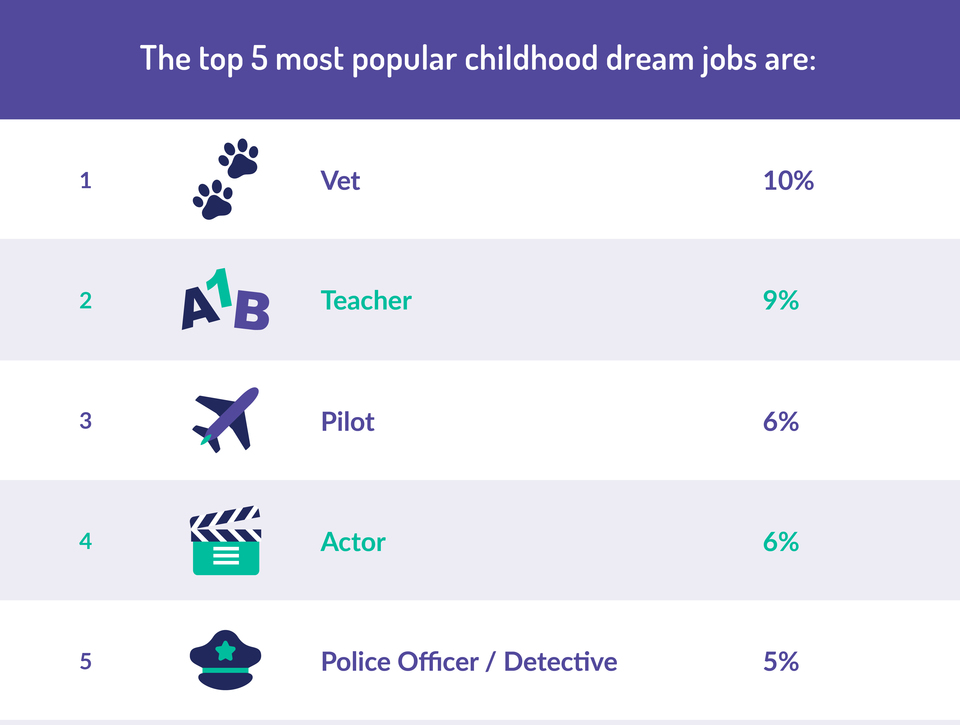 They say to never work with children or animals? It turns out this message doesn’t get through if you’re a child yourself - but it might explain why these dreams don’t always become a reality.

The top 10 most popular childhood dream jobs are:

Clearly inspiration is taken from both real-life role models and those on the big screen, with the dream jobs being a mixed bag of public service and celebrity.

Men wanted to be Pilots and Athletes, whilst Women dreamt of being Vets and Teachers

Breaking this down into genders, it seems that gender stereotypes were still in play for today's adults as children.

But these dreams don’t die - a huge 64% of adults still wish that they were doing their childhood dream job now.

Pirouettes to paperwork, singing to signing contracts... do childhood dreams shape future careers in any way? 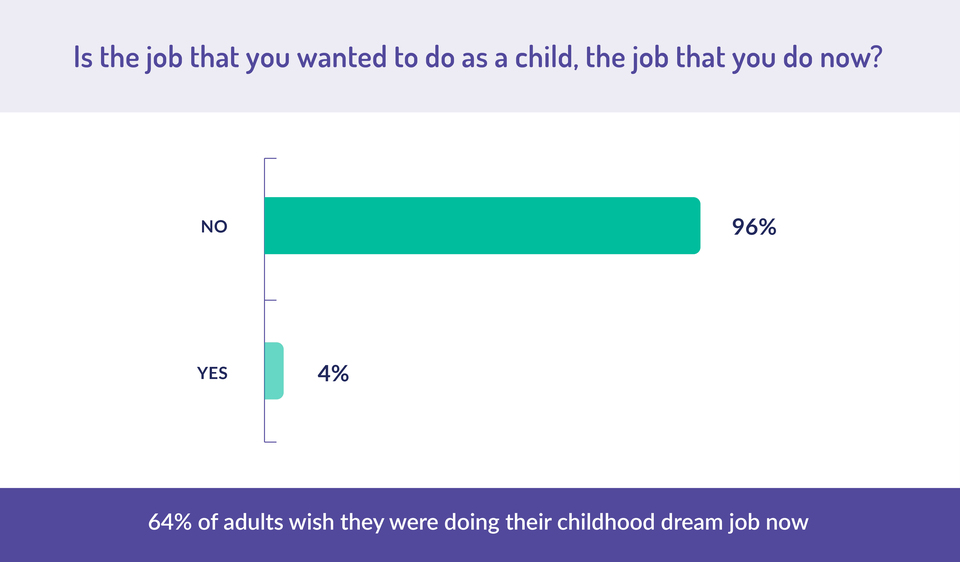 Sadly, as we all know, dreams don’t always become a reality. 96% of adults aren’t now doing the job that they wanted to do as a child and only 4% of adults were successful in achieving their younger selves dream job.

So even if we don’t fully follow them through, do childhood dreams point us in the right direction for the future or are dreams and reality light years apart?

The survey found the childhood dream jobs most likely to become a reality are the dreams of becoming a Lawyer, with 14% of those who dreamt of becoming a Lawyer now working in the Law, Law Enforcement or Security sector and Teacher, with the same amount now working in Education. Following this, 1 in 10 of those who dreamt of being a Doctor, now work in the Healthcare industry.

However, some jobs in reality don’t have such clear connections to their childhood ambition...

The most popular jobs for the top childhood dreams to turn into are: 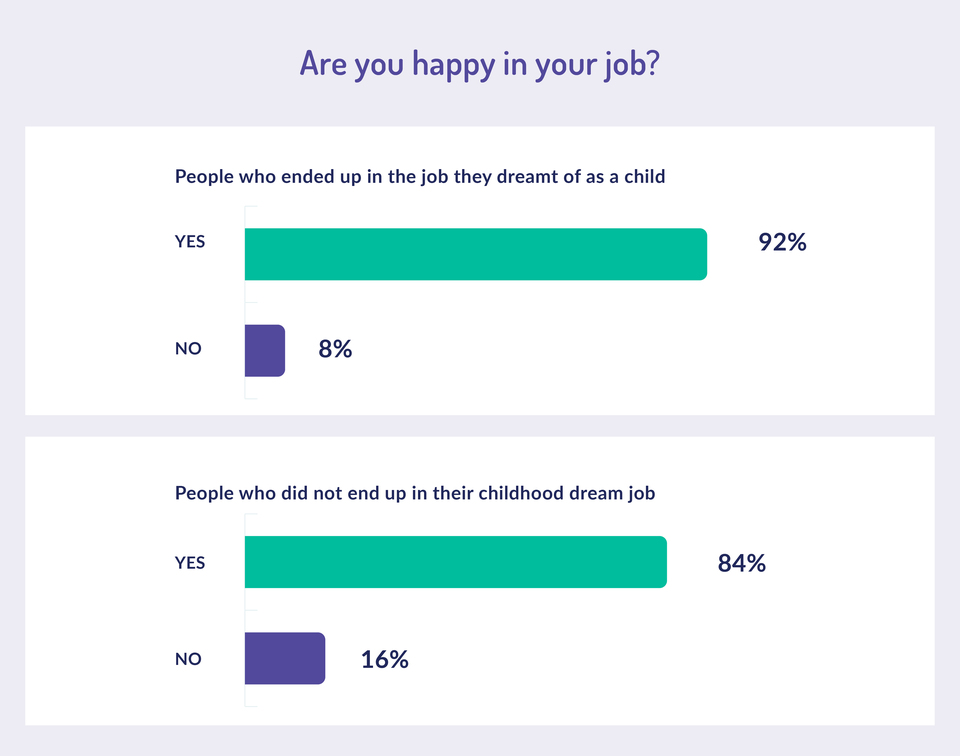 Of the lucky ones who made their childhood dream a reality, 92% are happy in their current job, leaving only 8% unhappy in their dream role.

Those who didn’t pursue their childhood dream are twice as likely (16%) to be unhappy in their job. Does wistful thinking to dreams gone by mean that we are left feeling that the grass is greener elsewhere?

So why didn’t these dreams become a reality? 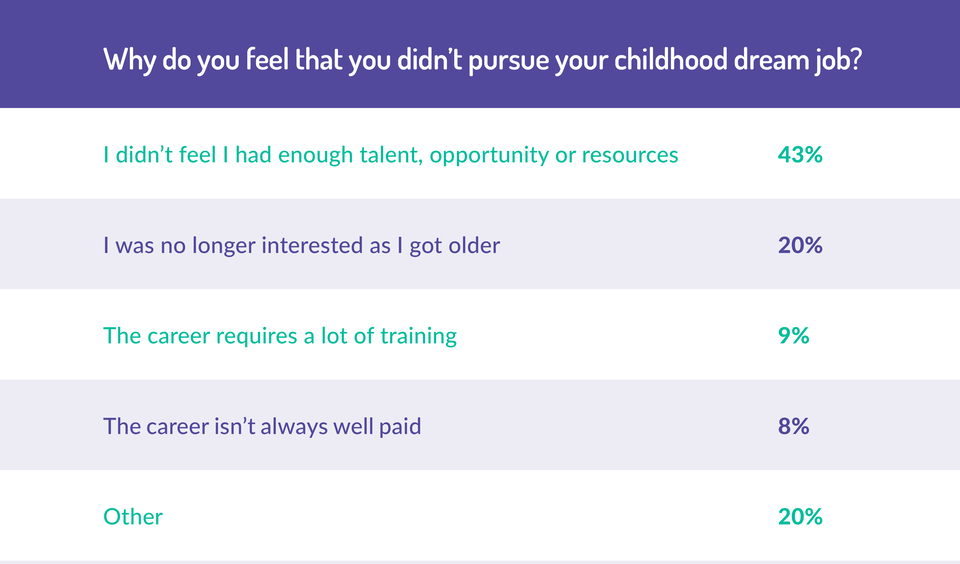 Sadly, a huge 43% felt that they didn’t have the talent, opportunity or resources to pursue their childhood dream job, which breaks down to a disproportionate 28% of women, compared to just 15% of men. Begging the question - is this a lack of confidence or is there a feeling of lack of opportunities for young women?

One specific dream role struck up some questions. With Teacher being the second most popular childhood dream job, it seems curious as to how there is a national teacher shortage in the UK - where do all these budding educators go?

The main reason given as to why people didn’t pursue their dream of becoming a teacher was due to not being interested as they got older (40%), but this was followed by a substantial 15% who thought that this career wasn’t well paid enough. With the average salary for a qualified teacher in the UK being £23,720 - £35,008, compared to the national average salary of £35,423 - it shows that this dream job may not be offering enough to lure those entering the job market.

Is there a happily ever after? 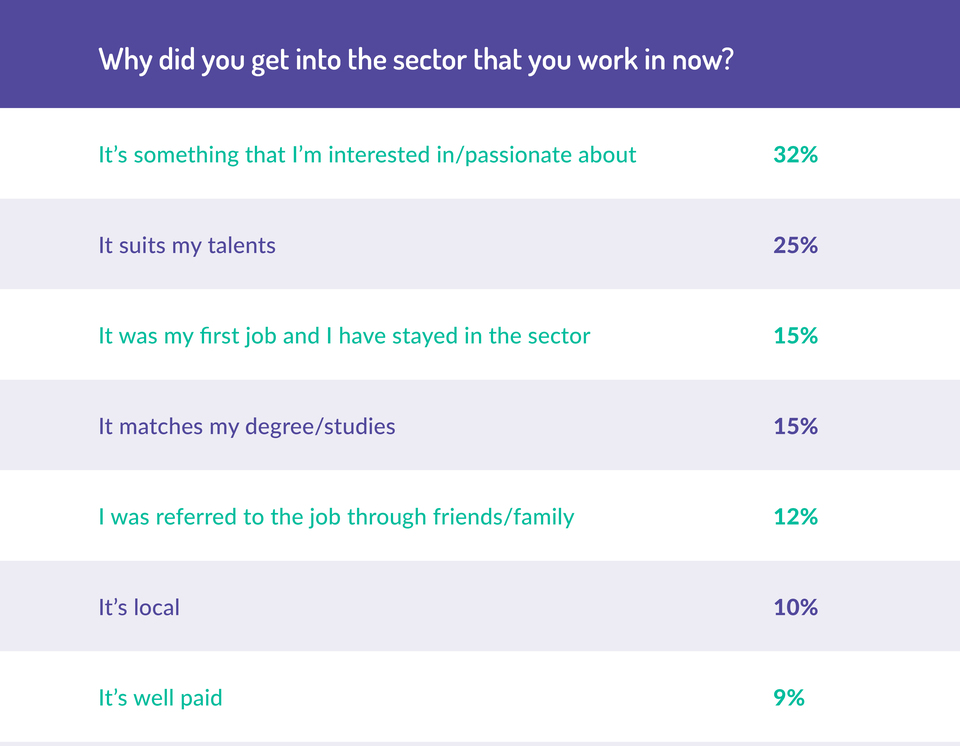 Despite the majority of adults wishing that they were doing their childhood dream job now, 32% of people got into their current role because they are interested or passionate about the industry, and a huge 99% of these people are happy in their jobs - so it isn’t all bad.

Other routes into a job which lead to workplace happiness include those who got into their job as it suits their talents (25%), which has led to 95% of these people being happy at work. Whilst 15% work in their role as it matches their studies and 94% of these people are happy.

But not all routes lead to equal levels of happiness.

Of the 9% of Brits who pursued their career because it’s well paid, 18% are unhappy in their jobs - almost 20x higher than those who followed their interests or passions. Could this be proof that money can’t always buy happiness (or motivation and team incentives, if you work in HR?)

So if you didn’t follow your childhood dream, don’t worry, it seems that following your interests and passions into a career is, apparently, the key to living happily ever after.