How many Brits reach 10,000 steps a day and how many are trying? 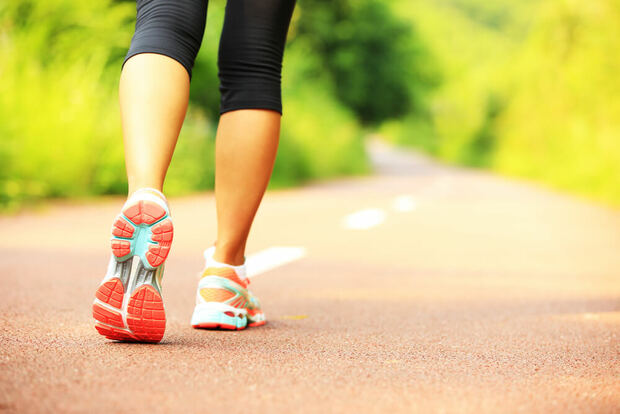 Obsessed with your fitness tracker? You're not alone.

Ever felt like you don't have time to visit the gym? Or maybe, felt like after a long day at work you just don't have enough energy for exercise too? Most of us will be familiar with these challenges, and to help, many of us look for simple ways to be more active in our everyday lives.

Fitness trackers are a method that continues to grow in popularity, and shows no signs of slowing down - we all probably know someone who won’t walk anywhere without making sure that it contributes to the number on their device.

The goal for these fitness trackers is actually surrounded by discussion. Many ask where the ‘10,000 steps a day’ rule came from and what benefits it actually brings. Equivalent to walking 5 miles a day, fitness trackers reward users with a happy notification when the milestone is achieved - but whilst this goal is debated, it begs the question of if Brits actually care about meeting this goal and why?

At Perkbox, we conducted a study of 2,850 people to investigate if Brits are tracking their steps, how many they’re reaching and why the public wants to achieve this goal. Here are the key findings: 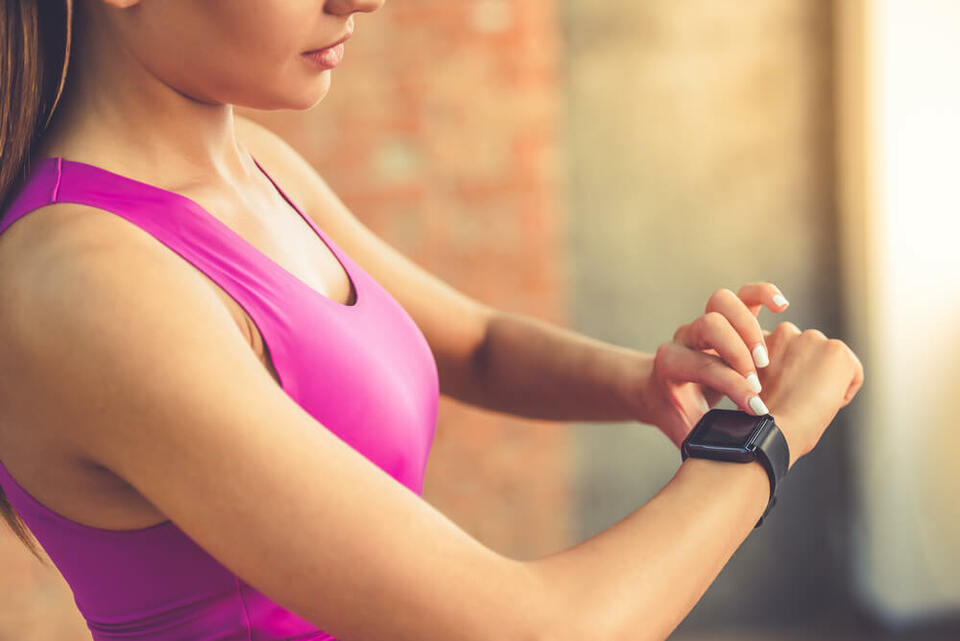 Adults of working age in England average about 9.5 hours per day of sedentary time, according to the British Heart Foundation. Perhaps unsurprisingly, sedentary lifestyles can have huge health impacts, including increased risk of high blood pressure, obesity and increased risk of certain types of cancer to name a few.

Whilst activity and exercise is a very personal thing and different amounts are right for different people, minimising the amount of time spent sedentary each day remains important.

But why is the well-known goal to reach 10,000 steps a day? 10,000 steps a day was actually the result of a 1960s marketing campaign in Japan, according to the BBC. In the run-up to the 1964 Tokyo Olympics, a company came up with a device which they started marketing to the health-conscious, it was called a Manpo-Kei, which in Japanese “man” means 10,000, “po” means steps and “kei” means meter - literally a 10,000 steps meter and the goal continued from there.

With origins as a marketing plan, the science behind ‘10,000 steps’ has been surrounded by discussion, but ultimately most are in agreement, if the goal can help people to be more active, it can improve health and reduce the health risks caused by inactivity.

71% of Brits are not reaching this goal, despite trying to 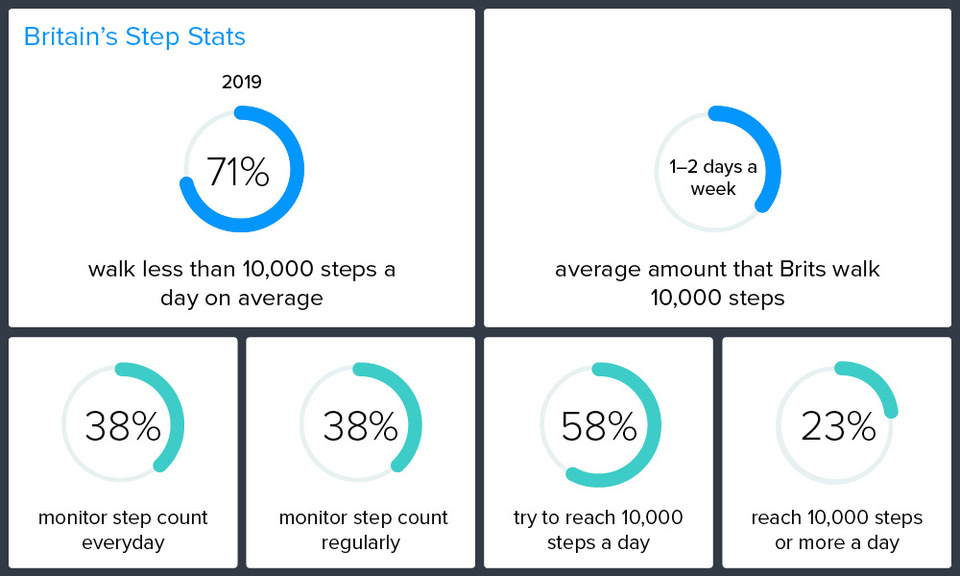 A whopping 38% of Brits monitor their step count everyday, whilst another 38% are tracking their steps regularly.

Despite the conversation in the health community surrounding what the daily step goal should actually be, it’s not deterring many from making 10,000 their target. A huge 58% are trying to hit the goal of walking 10,000 steps a day.

What’s more, the results revealed that the most common frequency to reach 10,000 steps is just 1-2 days a week, with over a quarter (26%) stating this is how often they reach the target. This is followed by 21% reaching the target 3-4 days a week, highlighting that many days of the week might be spent largely inactive. 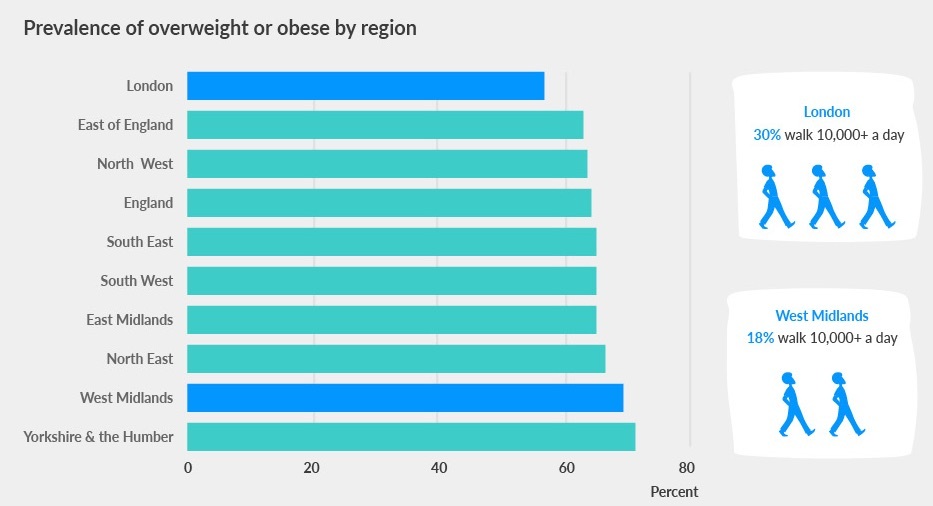 If you think about steps as just a number on a device, they might not seem important, but one of the results of an extremely sedentary lifestyle that most will be aware of is weight gain/obesity. Looking at the overall health of the country, NHS data revealed that the majority of adults (64%) in England in 2017 were overweight or obese, with 67% of men and 62% of women classed in this way.

The reasons behind these statistics contain many factors, but this data and those who reach 10,000 steps a day do appear to have some similarities.

According to the study, London has the highest percentage of people who walk 10,000+ steps a day on average - with 30% of those from London reaching this target. Looking at the NHS data, London also has the lowest proportion of overweight or obese adults in the UK.

Does this highlight that a frequent, simple act of activity, such as an increased number of steps could actually make a huge difference to health and wellbeing?

To learn more about supporting staff health and wellbeing, read our guide on how to launch an employee assistance program (EAP).

So why is this goal not being achieved?

What may come as a surprise, is despite the majority not reaching the target, it’s not because Brits feel that it's unachievable. 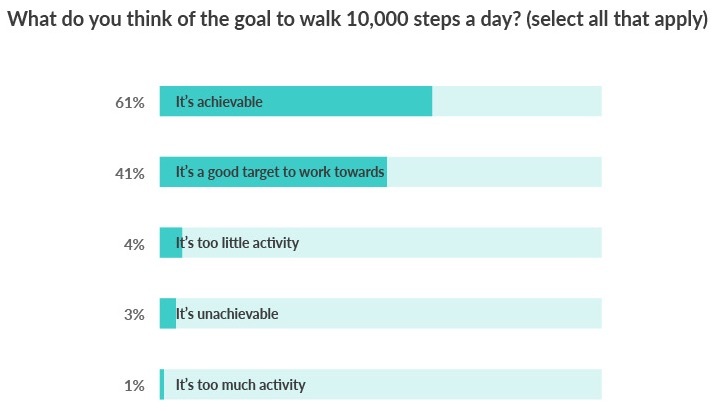 Although the debate surrounding whether 10,000 steps is a goal backed by medical research is ongoing, it seems that Brits are happy with the goal. Just 4% feel that this is too little activity and just a mere 3% think that this is unachievable.

As we all know, it can feel that there aren’t enough hours in the day sometimes. Whilst 58% want to hit this target and even more say that this is an achievable goal, 45% feel that they aren’t able to reach 10,000 steps a day because they are ‘not able to walk a lot at work’.

Sadly, all of these reasons highlight that many are putting other priorities above the most important priority of all - good health. 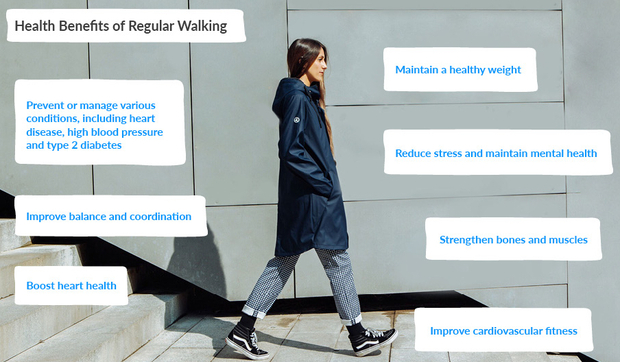 A step towards good health: 73% attempt to reach 10,000 steps to maintain mental health

According to HelpGuide, studies by the Havard T.H Chan School of Public Health found that walking for an hour a day reduces the risk of major depression by 26%. In addition to relieving depression symptoms, research also shows that maintaining an exercise schedule can prevent relapse.

Dr Catherine Glass. Clinical Director & GP for Doctor Care Anywhere, says: "As a practicing GP, I always ask about exercise levels when patients present with a physical or mental health problem. Activity levels positively correlate with health; the more active a patient is, the less likely they are going to be afflicted by a physical or mental health problem.
The choice of activity is of paramount importance. We as health practitioners should hold facilitative discussions with patients; helping them to discover an activity which they can enjoy, and can easily incorporate into their increasingly busy lives. Walking 10,000 steps remains an extremely popular and achievable form of exercise."

By those working towards a certain step goal to maintain mental health and reduce stress, it implies that a target (whether this target is scientifically backed or not) helps with motivation for activity, which can often be an issue for those suffering - highlighting how helpful fitness trackers and a daily step goal can be.

If it can feel overwhelming to include regular exercise into your routine and like there’s not enough time in the day to fit in activity, step goals should not feel like an extra task which add to stress.

The NHS recommends breaking up long periods of sitting with ‘shorter bouts of activity for just one to two minutes. Further, when walking, try to notice the sensation of your feet hitting the ground, or the rise and fall of your breathing - this mindfulness element of focusing on your body should allow you to interrupt any flow of worries in your mind and boost the benefits.

To learn more about the importance of mental health, read Mental health: Here's why it matters in the workplace.

Regular activity can also tackle and prevent a number of physical issues which can be caused by a sedentary lifestyle, including:

Take care of yourself and the people around you

Both mental and physical wellbeing are the cornerstones to a happy life. Encourage employees to be active and feel healthy, and the better the business will perform as a whole. Start giving your employees the care that they deserve with Wellness hub.