We surveyed 1,532 UK employees to find out what perks they want in 2021 and how their needs will shape the perks and benefits landscape in the New Working World. The employees surveyed come from a range of ages, industries and working situations. Here’s what we found.

Which perks will make employees happier in 2021? 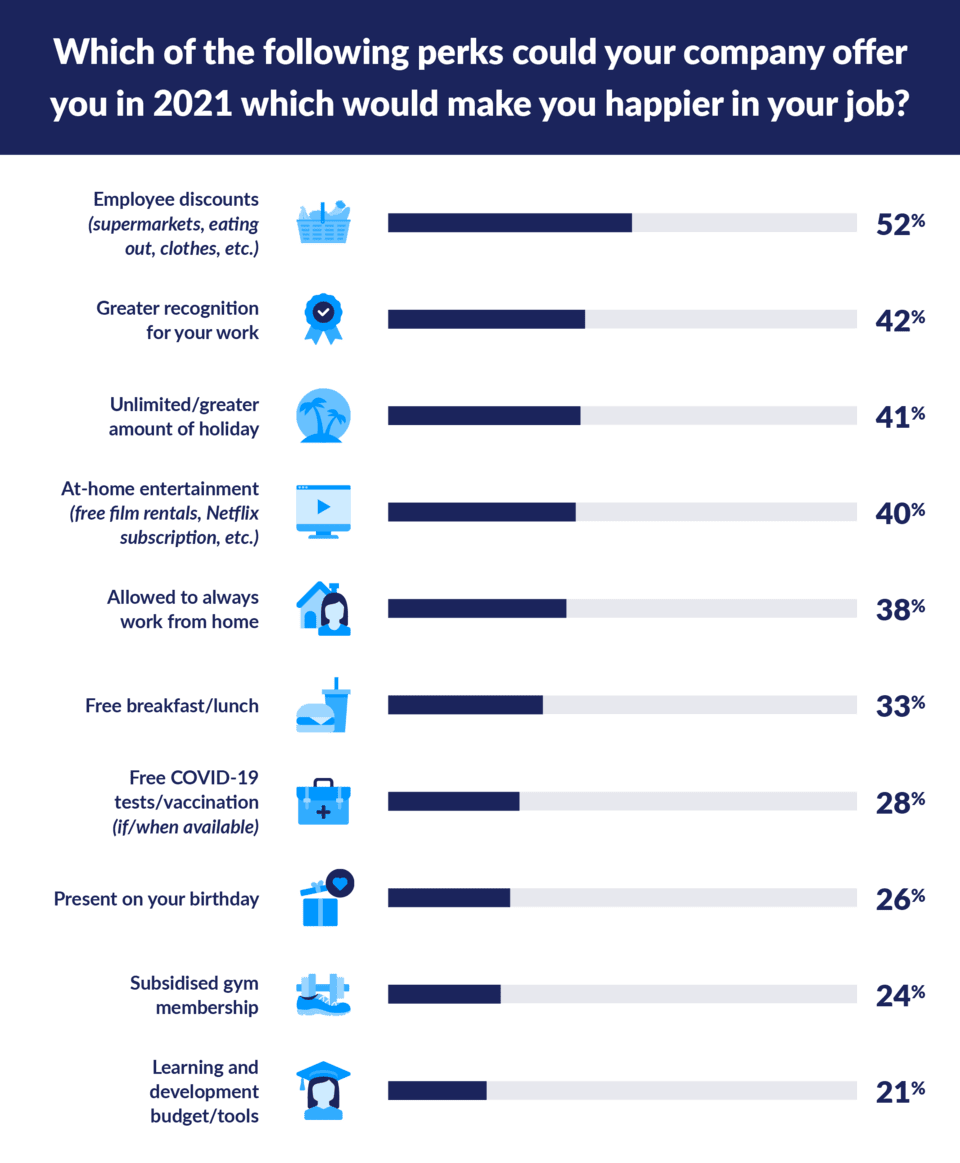 UK employees say that employee discounts (52%), greater recognition for their work (42%) and receiving unlimited/a greater amount of holiday (41%) are the top three perks in 2021 to make them happier.

You could argue this is because the pandemic has forced people to earn less but work harder. When this happens, employees need to find ways to make their money go further, as well as seek recognition for their work and seek more opportunities to rest.

Looking closely at the top ten, you can see how the perks which employees say will make them happier in 2021 are divided between their work and home lives. Recognition for their work, being allowed to work from home, plus learning & development budgets would all help them be happier at work. Employee discounts, at-home entertainment and a present on their birthday would all help make them happier at home.

And the other perks listed in the top 10 – such as unlimited/greater holiday, free breakfast/lunch and free COVID-19 tests/vaccinations – can be used to improve employee happiness at work and at home.

Which employee benefits will support their wellbeing? 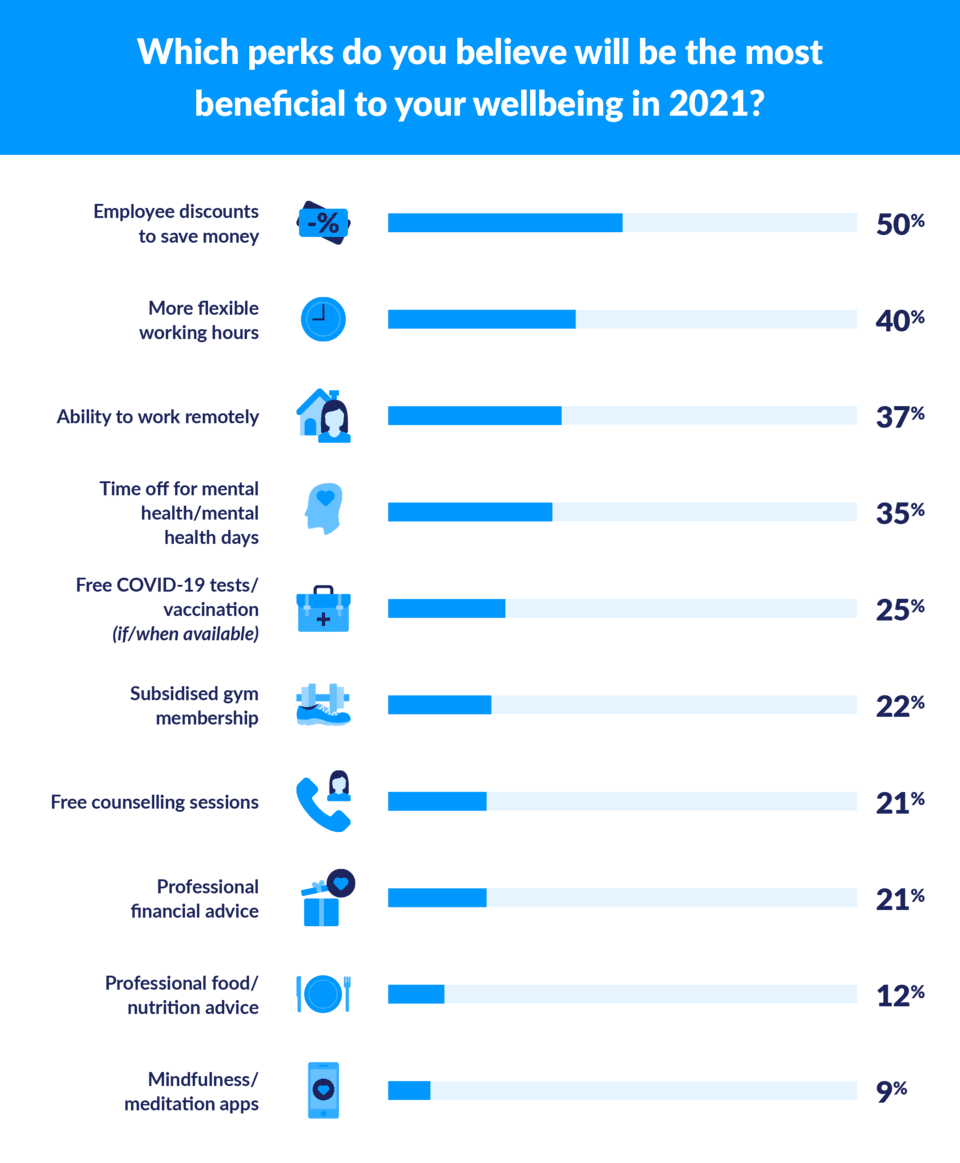 As well as saying they would make them most happy, 50% of UK employees say that employee discounts to save money would be most beneficial to their wellbeing in 2021.

The top three perks to improve employee wellbeing in 2021 is rounded off by more flexible working hours (40%) and the ability to work remotely (37%). It’s also worth noting that time off for mental health/mental health days was a very close fourth choice.

Along with the top four, the entire top ten suggests that financial and emotional wellbeing are the two key areas of concern for employees as we move into 2021. These findings correlate with our workplace wellbeing series which asked employees and employers about the state of their wellbeing in light of the events of 2020.

And with coronavirus being seen to affect older people most, it’s maybe no surprise that free COVID-19 tests/vaccinations from their employer are seen by 35% of those 55+ to be beneficial to their wellbeing in 2021. This is compared to 20% of 18–24 and 22% of 25–34 year-olds.

See our Employee Wellbeing Platform for more information on how to transform your employee wellbeing strategy.

Which benefits do non-remote workers value most? 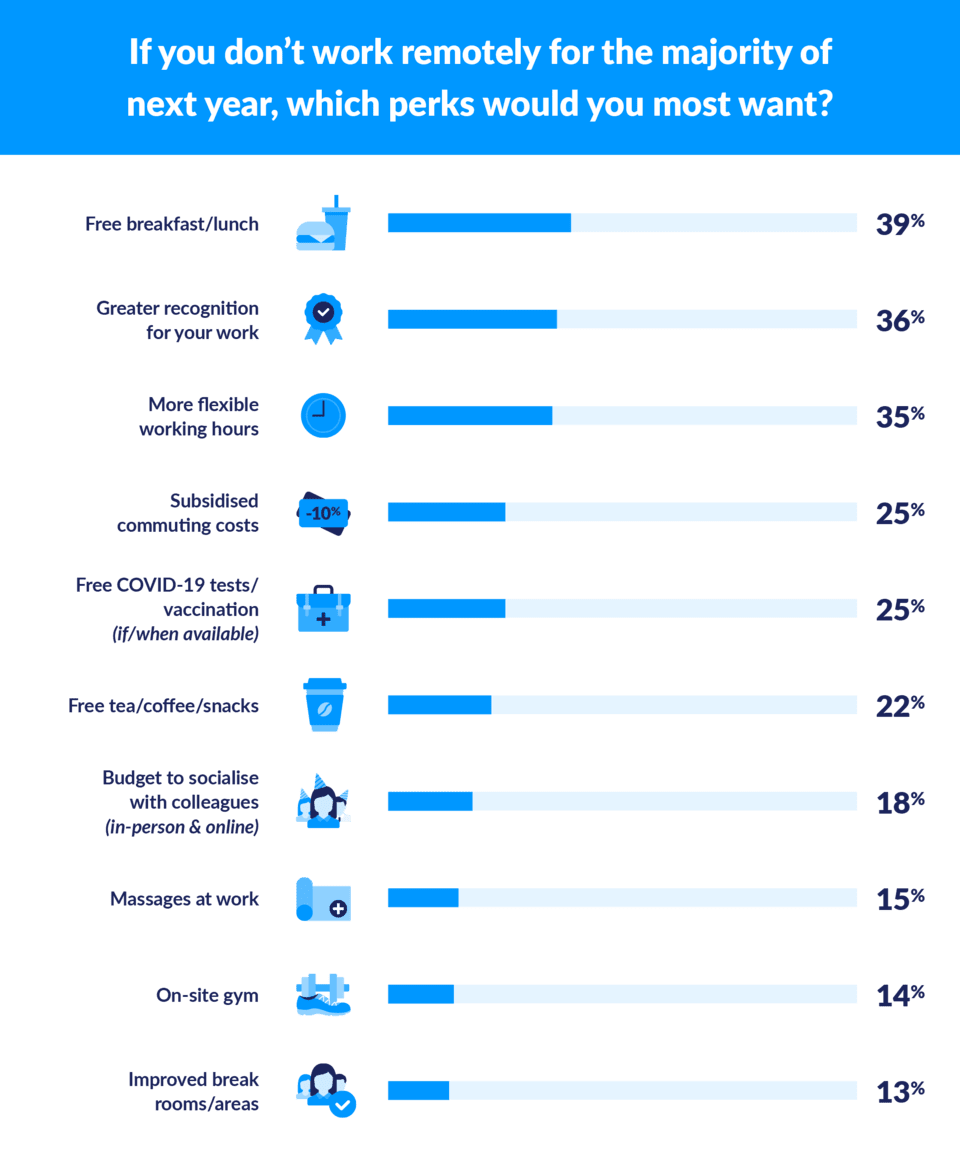 The top three perks which non-remote employees want in 2021 are free breakfast/lunch (39%), greater recognition for their work (36%) and more flexible working hours (35%).

While the age groups are largely in agreement with what non-remote working perks they’d like to see in 2021, there are a few splits when looking at gender. For starters 38% of women want more flexible working hours compared to 30% of men, 21% of women want a budget to socialise with colleagues compared to 14% of men and 15% of women would like improved break rooms compared to 9% of men.

The improvement of break rooms is the one aspect which divides the age groups too. 18% of those aged 18–24 and 16% aged 25–34 want to see better break facilities in 2021 but this is only shared by 7% of those over 55 and 10% of 45–54 year-olds. This could come down to younger people seeing work as a way to grow their social connections and is backed up by other results in our survey.

Younger people, for example, are less interested on the whole about being allowed to always or occasionally work from home. For employers looking to build a non-remote workforce in 2021, highlighting the social side of your business could go a long way in attracting young talent.

What are the best staff benefits for remote employees? 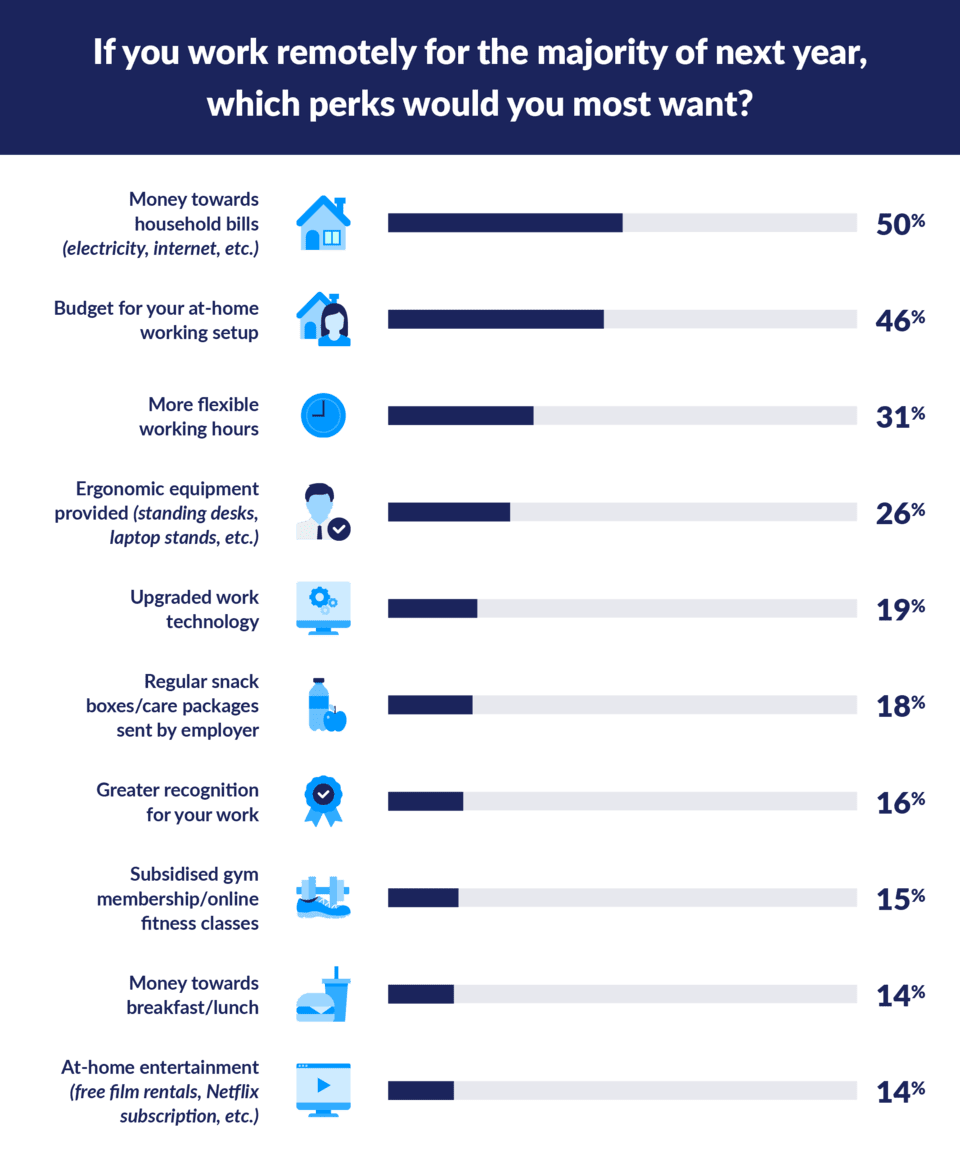 With many employees not working from home before the pandemic, our homes were primarily designed for living in and we had set outgoings. Now people are struggling to find the right working arrangements and household bills are increasing. And based on our findings, it appears that employees want their employer to help them.

Working remotely has also shown that a rigid 9 to 5 isn’t strictly necessary – it’s even debatable if it was before the pandemic. People are now free to work when they choose without being in an office for a set number of hours, completing tasks at a time which suits them. Of course, there are businesses which will still need to operate within a core set of hours, but employers who are more flexible and take outcome-based approaches will be more appealing for employees in 2021.

Having regular snack boxes/care packages sent by their employer splits the genders and business sizes. 22% of women working remotely want to receive them compared to just 12% of men. 21% of employees at companies with 250+ people and 20% at those with 50–249 also favour receiving care packages in 2021. This is in contrast to just 11% of employees at companies with 19 or fewer people and 14% at those with 20–49 wishing to receive a care package while working remotely.

How did employees feel savings should be passed on to them if their employer saved on 2021’s office costs through remote working? 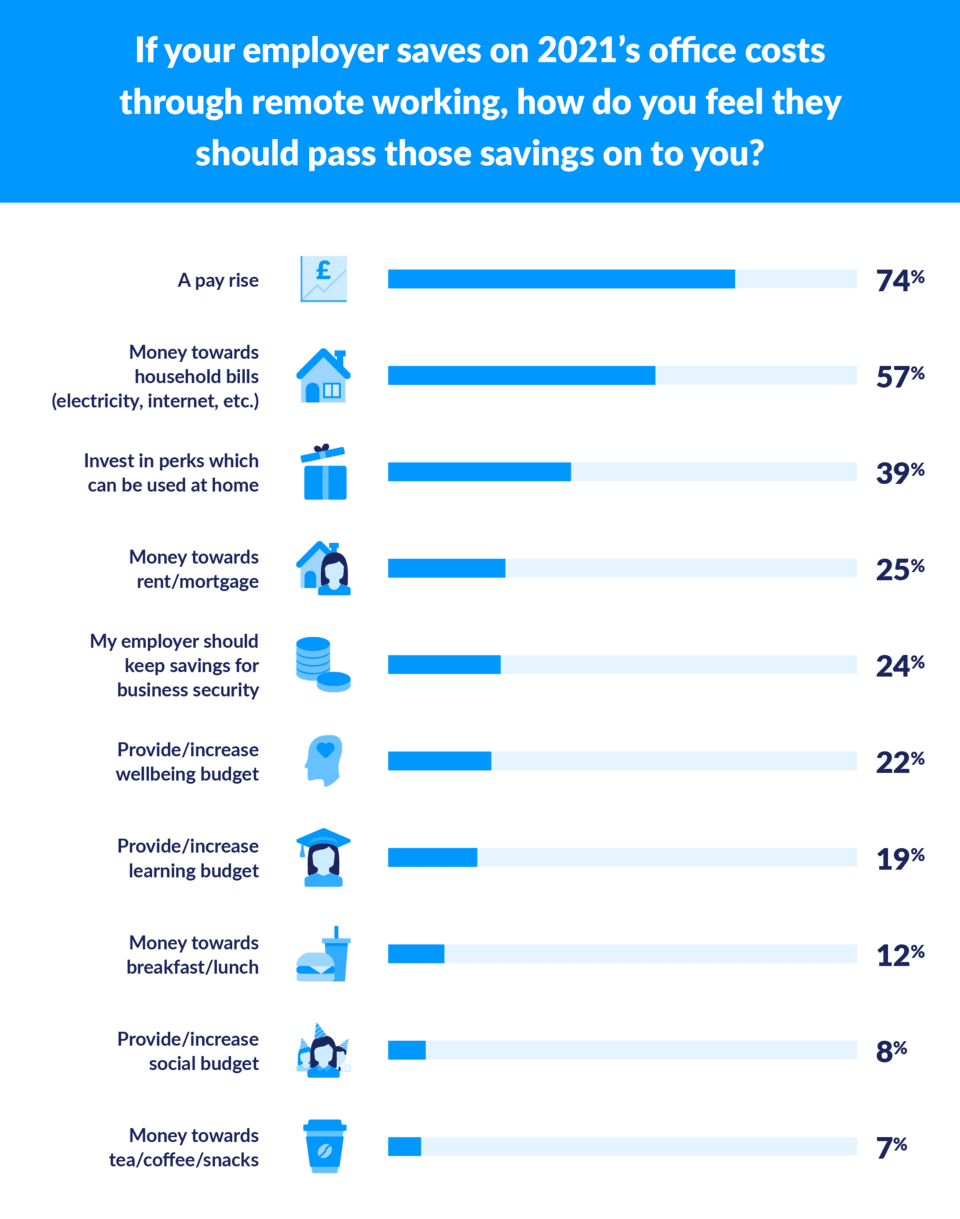 Unsurprisingly, 74% of employees say they should be given a pay rise if their business saves on office costs in 2021 – the most popular choice.

Money towards household bills is the next most popular option, being chosen by 54% of employees. And rounding out the top three, 39% of employees would like those savings reinvested in perks which they can use at home.

From those wishing to take those savings as a pay rise, this was the preferred option for 83% of 18–24 year-olds but only 64% of those aged 45–54. This may be a reflection of the living situations we touched on earlier in this piece and younger people may see a higher salary as a way to get on the property ladder sooner.

Confirming this somewhat, having the savings passed on towards household bills was the preferred option for 60% of 45–54 year-olds but only 43% of those aged 18–24. With the older generations having more dependents at home, getting relief from their employer towards household bills could possibly be a big help on their finances.

Nearly a quarter (24%) of employees would like to see their employer retain the savings they make from reducing office costs for the financial security of the business. With the coronavirus pandemic showing just how uncertain our futures can be, it appears people want their employers to be as financially stable as possible.

Different types of people are attracted to more stable or more risky employment propositions – sometimes there isn’t the luxury of an option – but a trend we see in the New Working World could be many businesses being less adventurous to ensure long term viability.

Which employee perks are your teams least interested in receiving in 2021? 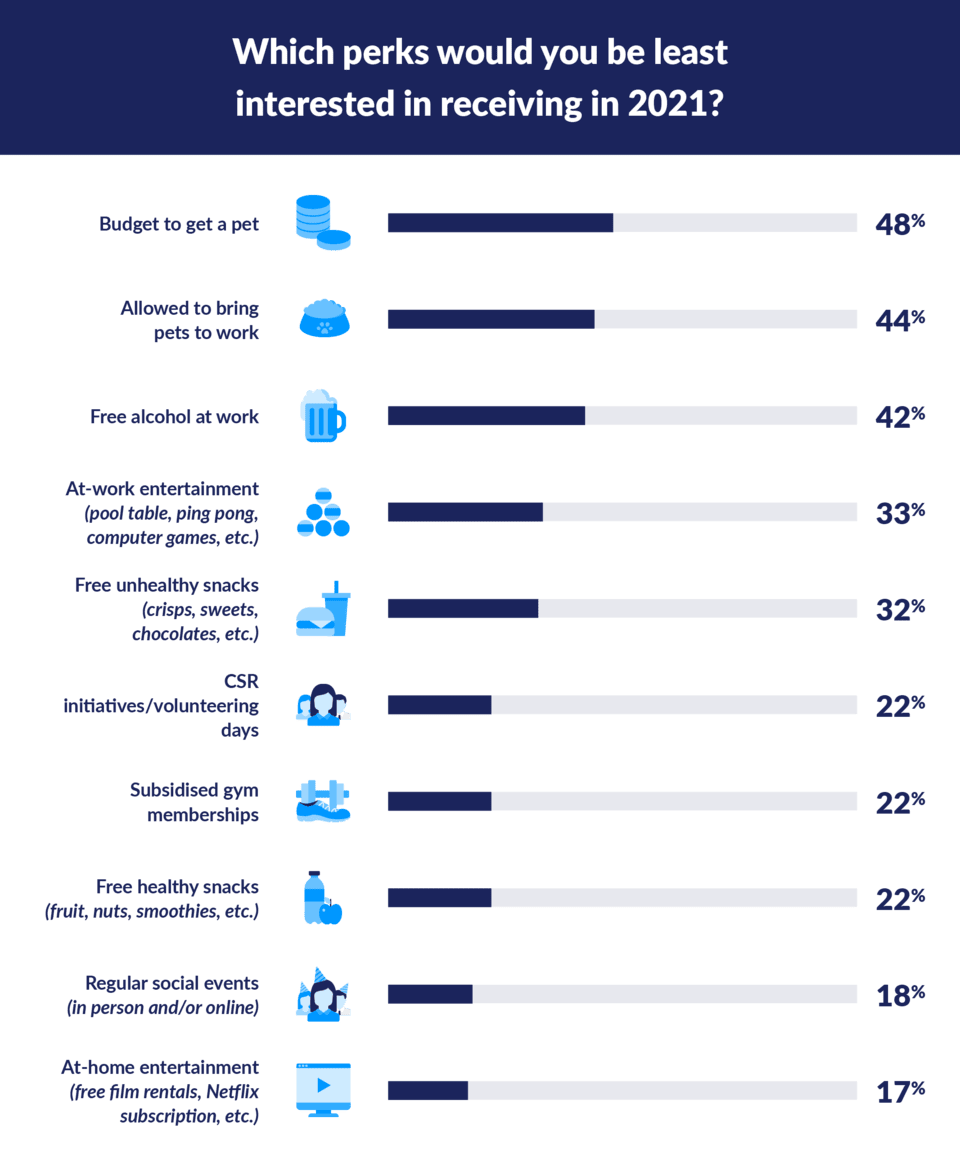 On top of that, 33% of employees not interested in at-work entertainment (pool table, ping pong, computer games, etc.) and 33% don't want free unhealthy snacks. This suggests that the Silicon Valley-style offices will no longer be a draw for employees.

Now that so many see working from home more often as the norm in the New Working World, these incentives could quickly find themselves becoming ‘perks of the past’. After all, if we’re not going to the office as often, we’re not going to use those perks as often and employers will be able to save money on them.

This correlates with the findings on what employees would like their employers to do with the savings made on office costs, as 39% said they’d want their employer to invest in perks which can be used at home. Where lavish offices were once used to attract top talent, we may see a shift in 2021 to the most lavish at-home working perks being a key recruitment driver.

Looking at the data at face value could suggest that the younger generations care less about CSR and volunteering. On the other hand, with Gen Z demanding more authentic ethical stances from brands, it’s possible that they’re not buying into the CSR stance of their employer.

How do you know which benefits employees want most? 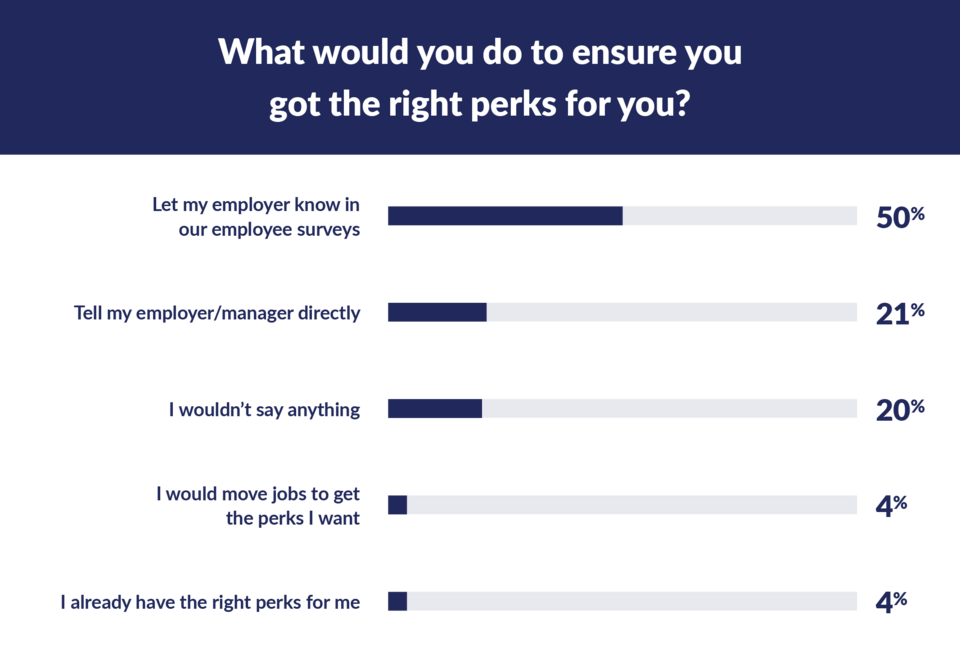 What’s most striking is that only 4% of employees say they already have the right perks for them.

This could be a reflection on how current perks and benefits packages were set up for the previous way of working and don’t fit in with the New Working World.

As well as using the findings in our survey, you’ll likely benefit from asking your people which perks they want most in 2021. And as you can see from our results, half (50%) of employees would prefer to tell their employer which perks they want through an employee survey. Only 21% say they would tell their employer/manager directly 21% and a further 20% wouldn’t say anything at all!

To encourage those employees who don’t feel comfortable to share their thoughts on the perks you offer, we’d recommend creating an anonymous survey which will make them feel more comfortable. Doing so, you’ll get the insight of those who want to give feedback through a survey as well as from those who are less likely to come forward.

For those prepared to tell you directly anyway, you could try holding a town hall-style meeting about the perks you offer to get open feedback from your people.

5 of the best employee perks ideas according to our research

What someone considers to be a great perk can be subjective, for example, a remote employee won’t value free office snacks, but instead, may prefer a discount on their local gym. Consequently, the best perks should appeal to the majority of your workforce, regardless of where they are based.

With that in mind, we've created a helpful summary of the most meaningful perks that will attract top talent, reward great employees, and keep your teams engaged.

Looking for an all-in-one employee benefits and rewards platform? Look no further than Perkbox.

The headline finding from our survey is that UK employees say that employee discounts are the perk which will both make them happier and improve their wellbeing most in 2021- and HR teams should take note.

Adding to this, employees say receiving greater recognition for their work would make them happier in 2021. And this is a view shared by both remote and non-remote employees.

What employees are least interested in are free alcohol at work, at-work entertainment (pool table, ping pong, computer games, etc.) and free unhealthy snacks. What’s clear in the New Working World is that perks and benefits don’t need the flash of Silicon Valley which people were chasing before. Employees want employee discounts which make an actual difference to their bank balance and they want to be well recognised for their contributions to your business.

If you’ve been using your HR budget to provide free alcohol and unhealthy snacks to your employees, it may be time to switch to what could be referred to as the ‘bread and butter’ perks of employee discounts and recognition- and take time to find a good employee benefits provider while you're at it.

Want more inspiration on what you can offer? Check out our Perks page to see what types of employee discounts are available.

Provide 4,000+ perks and benefits to your entire team

Perks and benefits employees can use any time, anywhere

Three ways to kickstart your recognition and reward strategy